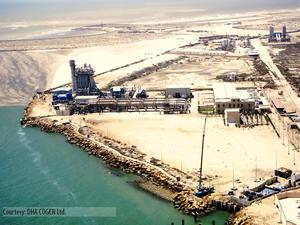 With a population of 23 million, Karachi is the third most populous city in the world. The metropolis faces acute water scarcity. According to Karachi Water and Sewerage Board, the total water demand of the city is 1,000 million gallons per day, whereas the city is receiving only 400 million gallons daily. This shortfall is attributed to non-availability of sufficient water in the Hub Dam due to lack of enough rainfall. The board also mentioned that 15 percent of the shortage comes from water theft and the menace of unauthorized connections.

Karachi, situated on the coast of Arabian Sea, is blessed with sea water supply. Water desalination could be one of the potential solutions for addressing the water scarcity in Karachi. Desalination is the process by which seawater is rendered into fresh water. The seawater is heated to the point of evaporation, and the resulting vapours are then condensed into fresh water.

One such plant was conceived for in the Defence Housing Authority (DHA) – one of the largest housing authorities in Asia. Work was started on the plant called ‘DHA Cogen Limited (DCL)’ in 2003 as a joint venture between DHA and Sacoden Investments of Singapore. The plant was supposed to use technology provided by (Swedish company) Alfa Laval to produce portable drinking water. DCL was supposed to be a cogeneration plant i.e. it would have produced electric power in conjunction with the fresh water. It was supposed to produce 3 million gallons of water per day and 94 MW of electrical power. Supplying to more than 100,000 households and businesses in DHA.

In February 2008, military ruler Pervez Musharraf inaugurated the plant with great fanfare however, for whatever reasons, ‘technical faults’ appeared in the plant and it could not produce the promised quantity of water and electricity for the citizens of Karachi for even a single day. Ultimately the plant was closed down in 2010.

Karachi is a rapidly expanding city, with projects such as Bahria Town and DHA City extending the expanse of the city by leaps and bounds. Incidentally, both of these projects are closer to the Hub Dam than much of Karachi proper, a fact that bodes ill for the residents of the city. The need of the hour is to revive the DHA Cogen project and initiate other similar projects so that fresh water supplies can be guaranteed for our beloved city.